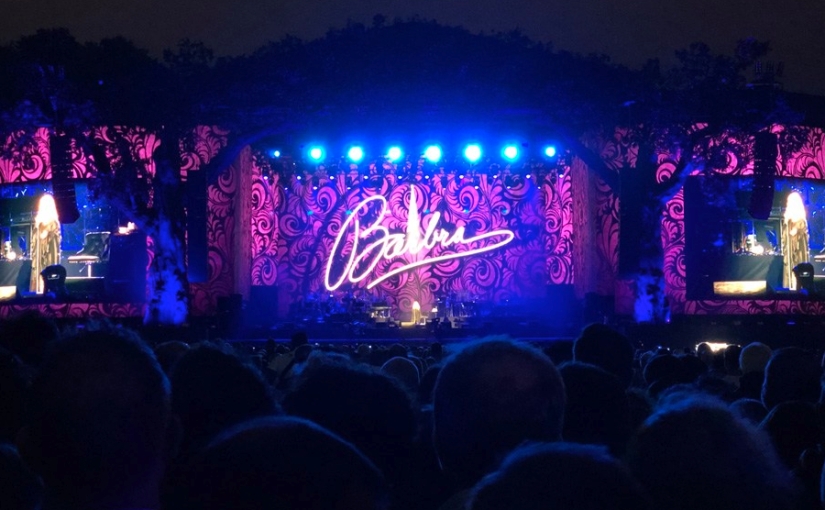 This was my first visit to a British Summer Time (BST) event; a bit of a mini Glastonbury with a sizeable chunk of Hyde Park given over to a full day’s worth of music, eating and drinking. There were three different music tents with some other side attractions; the ‘Barclaycard Sensorium’ basically consisted of an elevated bar that you entered through a dark tunnel full of foam gym rollers stuck to the walls!

The main draw on the ‘Great Oak Stage’ on Sunday 7th July (2019) was Barbra Streisand but before that we were treated to Richard Marx, the Kingdom Choir, Kris Kristofferson and Bryan Ferry.

When we’d arrived at the park, getting in was ok, there was a huge queue but they very efficiently got everyone in. The problem lay when we got inside the park and everyone was kettled just prior to the main area for what seemed like ages. The reason we found out later on, was that Ms Streisand wasn’t happy with the soundcheck. It was worth the wait.

Starting with an ‘Overture’ that lulled the excited crowd into thinking she would appear any second, it took a good 5 minutes before she eventually appeared, a vision in pink, the crowd went wild. Her opening number was a bespoke version of ‘As If We Never Said Goodbye’, slotting in numerous, funny references to the UK, London and the Royal Family – the crowd was now putty in her hands.

Throughout the show, Babs had some talky moments ‘Did you go to the Pride parade yesterday? Her driver had asked, ‘No, why would I? I knew they’d all be here’. Then later on talked us through some photos from her scrapbook covering her six decade long career with the focus on her UK trips when filming and performing.  I was especially delighted to see a photo from ‘On a Clear Day you Can See Forever’ shot outside the Brighton Pavilion.

This being Barbra Streisand there were many few bizarre moments, some intentional and some really not. The most bizarre being her rendition of ‘Silent Night’! Nearly everyone looked at each other completely befuddled at her singing a Christmas carol in the middle of summer. Also, just prior to the encore, her three (cloned, I believe) pooches were wheeled on to the stage in a pram for us all to say hello to.

Barbra also had three guests join her in duets on stage, ranging from the sublime to the car-crash: Ramin Karimloo, who we’d seen on stage as the Phantom a few years ago was brought on to sing a solo enabling Babs to shuffle off for a costume change. When she came back they sang a lovely rendition of ‘Music of the Night’. Even though it was an odd choice for a duet, they made it work.

The other two duets weren’t quite as successful. Kris Kristofferson had done 45 mins earlier in the day and from what we’d heard from across the park, it wasn’t great. Barbra then later brought him on stage to duet with her their track from ‘A Star is Born’ ‘Lost Inside of You’. The audience went wild as he came on but then it felt like she was helping him limp through a song he could barely remember. Quite a while after, another ‘secret’ special guest was Lionel Richie who performed a duet of ‘The Way We Were’ but it seemed like Mr Ritchie was out of time and he’d crucially forgotten the opening lyric! This was always better as a solo and I really wish she’d it kept it that way.

Highlights for me included ‘No More Tears (Enough is Enough)’ which got the crowd exuberantly singing along, the beautiful ‘Send in the Clowns’ and the encore cover of Judy Garland’s ‘The Man That Got Away’.

Barbra showed the 65,000 strong audience exactly why she is counted as one of the all-time greats and still is, her voice and stage presence being as strong as it ever was.